This site uses cookies. By continuing to browse the site, you are agreeing to our use of cookies.

The Marine Environmental Monitoring Station realization project is the result of the cooperation between all public research institute and universities associated with the DLTM to create an advanced monitoring system, complementary to the existing ones in Ligurian sea. This is possible making a common factor human resources, infrastructures and equipment, contributing to the costs of maintaining efficiency.

For the preliminary and executive design of the Project, DLTM has selected, through an appropriate public procedure, an expert consultant (Hydra Solutions) for the systems design operating in marine environment.

With the support of Hydra Solutions and the interested EPRs, DLTM has completed the detailed definition of the infrastructure layout, which consists of two modules: a coastal station, called "Mooring Costiero" and an offshore structure, called "Levante Canyon Mooring ".

A hi-tech observatory wired at 10 meters depth with real-time data acquisition, equipped with a CTD proﬁlator probe, whose main feature is to allow real-time visualization of data related to conductivity, pressure and temperature; a sophisticated gravity meter for measuring gravity acceleration; a correntometer consisting of a propeller free to rotate that creates impulses proportional to the speed of the water; a digital underwater camera to monitor the underwater ecosystem and special cages for studying the degradation of plastics and the absorption of pollutants in the marine environment. This innovative submarine observatory was installed on 03/04/2020 at Santa Teresa Bay (La Spezia) by the Ligurian District of Marine Technologies (DLTM) together with ENEA, CNR, INGV, with the support of Cooperativa Mitilicoltori Associati and Comune di Lerici.

Among the parameters monitored, those of water conductivity, pressure and temperature have as their main purpose environmental monitoring and the study of the effects of climate change, whereas the Western Mediterranean Sea has witnessed numerous mass mortality events involving various aquatic invertebrate species. The first major mass mortality event occurred at the end of the summer of 1999, when about 30 species of invertebrates were severely damaged for more than 500 km of coastline (from the Eastern Ligurian Sea to the coast of Provence in France and the Balearic Islands in the north coast of Menorca in Spain), other similar events of mass mortality were observed in the summer of 2003 and 2018 always associated with high water temperatures.

In 2003 in the Gulf of La Spezia was recorded an increase of temperature of about 2°C to 20 meters of depth, this led to mortality events that totally damaged in some cases and partially in others a large part of the community of the population of the paramuricea Ottocorall clavata (red gorgonia) on the seabed of the Tinetto island, in the west area of the Gulf of La Spezia.

Having, therefore, an instrument like the CTD, that returns in continuous data on the health of our sea, allows us to monitor the evolution and to have information of all the marine-coastal ecosystem of the Gulf of La Spezia, also to the ends of fundamental importance for the protection, integrated management and exploitation of its marine ecosystem resources. Moreover, considering that the chosen site for the installation of the observatory is close to the mouth of the Port of La Spezia, the presence of the correntometer turns out of fundamental importance in order to monitor the speed of the current to the mouth itself of the port, for the construction of coastal current models for the construction of coastal defence works and for the study of sedimentary transport phenomena during dredging works.

Moreover, the infrastructure can also be used by companies and research institute, as a real laboratory of experimentation to test cutting-edge technologies and innovative underwater sensors. The wired connection of the infrastructure will also allow real-time viewing of the captured geophysical and oceanographic images and data.

The offshore station "Levante Canyon mooring" is a system of multidisciplinary monitoring offshore for the acquisition and processing of geophysical and hydro-oceanographic data of the Ligurian Sea, deployed at sea 23rd September 2019 offshore Cinque Terre coast, and realized from Ligurian District of the Marine Technologies (DLTM) in collaboration with the research Entities CNR, ENEA, INGV, with the support of the Hydrographic Institute of the Italian Navy. This observatory, located at about 600 m of depth in an underwater canyon, will promote the study of climate change, the protection of marine ecosystems and the mitigation of natural risks related to human activities.

Specifically, the observatory "Levante Canyon mooring" consists of an instrumented chain dedicated to geophysical and oceanographic monitoring in the deep sea of parameters such as salinity, temperature, turbidity and current speed for the study of the water bottom and column. Starting from the bottom upwards, the offshore monitoring station is characterized by a sediment trap placed at 582m of depth, which will allow to obtain information of the sediments and nutrients contribution, which are channeled into the canyon and come from the continental shelf. A torbidimeter at 580m depth that has the purpose of recording the turbidity of the water ( the instrument detects the light diffused by the particles suspended in the water, generating a response proportional to the turbidity or to the solids suspended in it). Then there are sensors of conductivity, temperature and pressure placed at three different depths, respectively 579m, 335 m and 85m, in order to be able to compare the data along the water column. 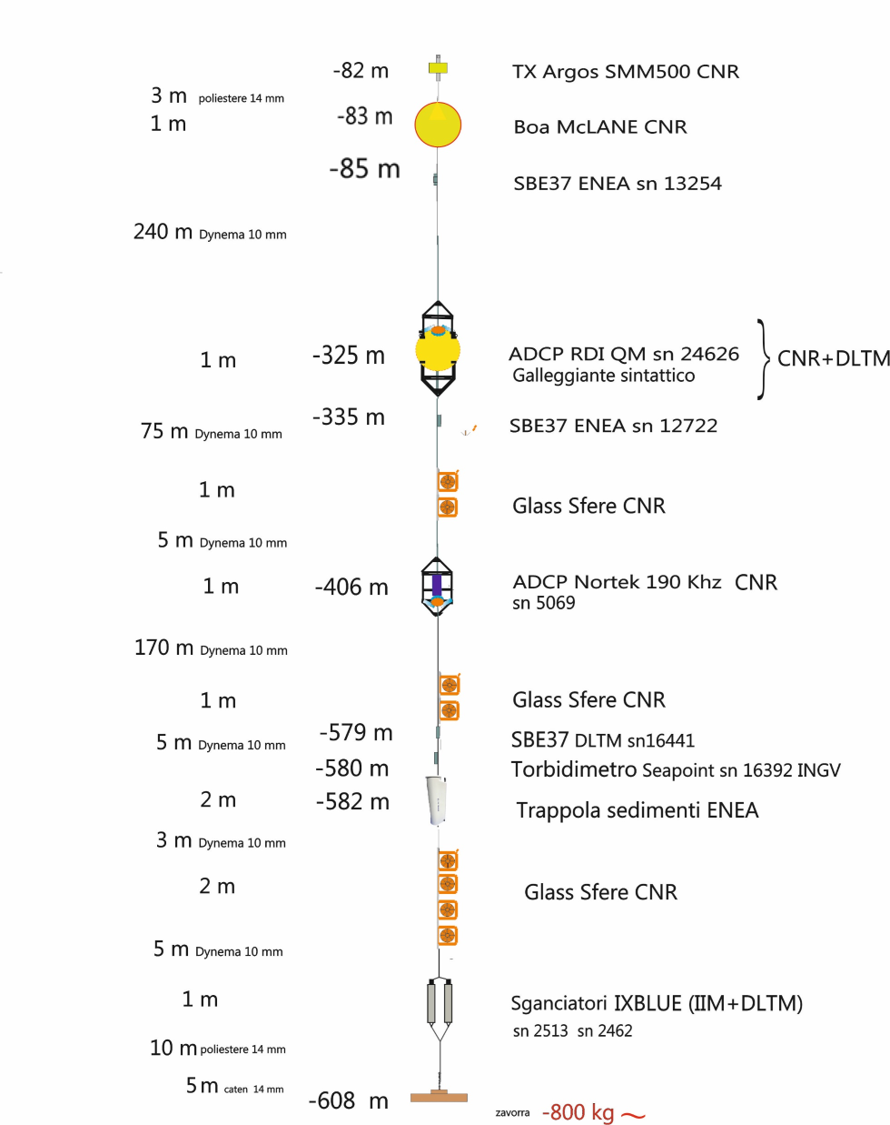 It must be kept in mind that the temperature of the sea water does not have a uniform distribution along the water column, which is affected by the warming of the sea by the sun rays. In particular, below the surface, the water layers are divided into three different zones:

The zone in which the maximum temperature variation with the depth occurs is called "thermocline". It is however difficult to determine the exact depth of the thermocline, so an approximation is used considering it as a water belt where the vertical thermal gradient (the temperature variation with the depth) is very high compared to the upper and lower layers.

In the Mediterranean Sea the seasonal trend of the water temperature conditions the fauna habtats that have to adapt to these different conditions during the year. In the winter months the superficial layers are rather cold due to the low insolation and the action of the winds. When the sea cools between March and April, surface water masses sink and through convective motions carry with them nutrients and oxygen in depth. With the progressive increase in solar radiation, in spring, the surface layers heat up, generating a growing thermal contrast with the deep waters. Instead, during the summer, the temperature of the water tends to stabilize, thanks also to the surface currents produced by the wind that separate the warm and less dense waters on the surface from the colder ones in depth. Under these conditions the thermocline is well delimited and is usually found between 15 and 40 meters deep. The first metres below the surface are characterised by temperatures above 18°C and by good water oxygenation. The underlying layer of the thermocline has a temperature that varies very slowly and is characterized, in the summer months, by poor oxygenation as it remains isolated from the atmosphere by means of the thermocline itself. It’s clear that rising seawater temperatures can have an impact on these balances, which can also impact the ecosystems that depend on them for nutrient and oxygen supply.

The offshore mooring also includes two acoustic corrections placed respectively at 406m and 325m depth, useful to obtain information, integrate and compare the data related to the current speed in two separate and significant points of the water column. This instrument measures the speed and direction of the current, on several predetermined dimensions along the water column, through the emission of acoustic waves thanks to the "Doppler" effect. In practice the instrument sends acoustic waves at a constant frequency, when they encounter the suspended particulates they bounce and are reflected back. If the particle that is hit by the wave front is moving away from the instrument, the reflected wave will have a lower frequency than that incident, vice versa if it is approaching the reflected frequency will be greater. Thanks to the Doppler effect, given the difference between the frequency emitted and the received, the acoustic current meter is able to calculate the speed with which the particles move and consequently the water currents.

The Levante Canyon Mooring then provides the instrumentation necessary for anchoring on the bottom, the flotation and the acoustic uncouplers for recovery, useful to bring back to the surface the entire instrumented line, during routine or extraordinary maintenance.

The installation of this mooring was made possible thanks to the oceanographic ship of the CNR "Dallaporta", allowing the positioning of the observatory at about 6.5 nautical miles off the Cinque Terre Sea Park, where the depth reaches the 600 m. This stretch of sea constitutes an exclusive point of marine observation, not only because it is placed inside the "Sanctuary pelagos", zone with high concentration of cetaceans, but also for the presence of an underwater canyon that, due to the strong background currents and the considerable contribution of sediments and organic substances, it creates an environment favourable to the development and growth of valuable ecosystems such as deep corals. A joint study ENEA and IIM in 2014 in fact highlighted with the support of a ROV (remote-controlled submarine) the presence of living white corals at a depth of about 570 m. These organisms give origin to deep ecosystems with high biodiversity, but are strongly impacted by bottom trawling and must therefore be preserved because of also their considerable scientific interest.